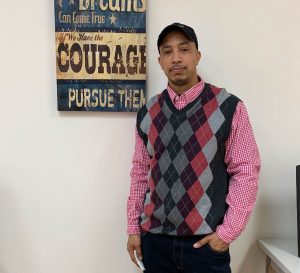 he was released from incarceration. One of the goals Mr. Miller focused on was giving back to the community and changing the negative perceptions of those with criminal backgrounds. He formed a non-profit organization called “Reformed Offenders Creating Change (R.O.C.C.), and has worked diligently to recruit new members and gain support from the greater New Haven area. One of the biggest projects he has worked on throughout the winter was to collect warm clothing and personal hygiene products for the homeless population. Steffon along with other members of the organization can be seen every weekend on the New Haven green distributing items that have been donated to support the R.O.C.C.

As an ex-offender, I know the obstacles we face, as well as the misperceptions and ideas people have of us. I want to help change those perceptions and help those like myself make a way through these obstacles that try to block us. – Steffon Miller