Mr. Newton began working with our Reentry program earlier this year. “The first couple of days after he started with the program he was very reluctant and appeared to only be here because his Parole Officer sent him. He didn’t 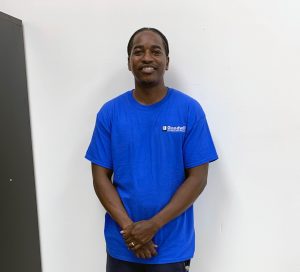 Today, Ja-Juan is an employee with our organization, and currently works as a helper loading and unloading materials from the trucks. The crew is responsible for picking up and dropping off donated goods to our stores and our attended donation centers. He absolutely loves his work, and was ecstatic to get a Goodwill shirt! His first day on the job one of the stops on the daily truck route was the Westville store. Ja-Juan was thrilled about this because it meant that he could pop into the Employment Center right next to the store and see his Community Advocate William.  He wanted to share his joy about his job with him and show off his shirt. William is important to him as he helped him turn a mandatory parole obligation into a chance to pave a new path for his future.

The opportunity to work at Goodwill of Southern New England has certainly made an impact on Mr. Newton’s life and demonstrates how vital it is to boost the self-esteem of formerly incarcerated individuals. These individuals have a lot of negativity and rejection in their lives following incarceration. Giving them the opportunity to work and be productive definitely leads to a successful transition back into the community.